After graduating college in 2002 I became fascinated with the topic of Lucid Dreaming.  I read a bunch of books on the subject, primary those by Dr. Stephen Laberge, who was really a pioneer in the field.

For those that haven’t heard of it, Lucid Dreaming is the state of becoming conscious of the fact that you are dreaming during the dream itself.  Most people have experienced this phenomena at some point in their lives.  Once Lucid, the dreamer has the ability to observe and in many cases control aspects of their dreams.

It turns out that there are many techniques one can use to induce this state of consciousness.  Dr. Laberge had developed a device, called the NovaDreamer, that you wore over your eyes at night.  The device had sensors that detected the REM (Rapid Eye Movement) sleep state and then flashed a blinking LED pattern that the dreamer could recognize, and become conscious.

This all sounded fascinating to me and being a newly minted ECE student thought it would be a piece of cake for me to build one of these devices myself.  I set out to do just that.

Rather than include all of the features of the more expensive alternatives on the market, I went with an MVP approach, to see if I could at least get some results with minimal effort.

Here are the features I included:

The basic theory of operation is that you teach yourself to wake up after a dream.  It turns out this is pretty easy and can be taught in a night or two using basic repetition (self suggestion) while falling asleep.

When you wake up in the middle of the night you put on the goggles and turn them on.  The goggles flash twice indicating that they are good to go.  A timer is then started in the micro.  Once the timer expires (which is easily adjustable in the source), the LED’s flash rapidly.

Once you put the goggles on you use a similar self suggestion technique and tell yourself that once you see flashing lights in your dream you will recognize that you are dreaming.  It turns out that when you wake in the middle of the night from a dream you typically go right back into the dream state when you fall asleep.

Another feature I added was the ‘Reality Check’ button.  It turns out that when you try these techniques you actually end up dreaming you are putting on the goggles.  When you press the “Reality Check” button the lights flash.  So, you train yourself to always press this button when waking up.  When you end up dreaming about waking up, the button won’t work (for some reason electronics don’t seem to work in dreams).

From a technical perspective this project was pretty simple.  I chose a simple 8-bit microcontroller from PIC.  The hardware components were pretty much all purchased at my local radioshack (do they even exist anymore?)  Total cost was probably $10-$15, but I forget exactly.

Unfortunately I don’t have the schematic handy, but you can see the basic setup in the pictures below: 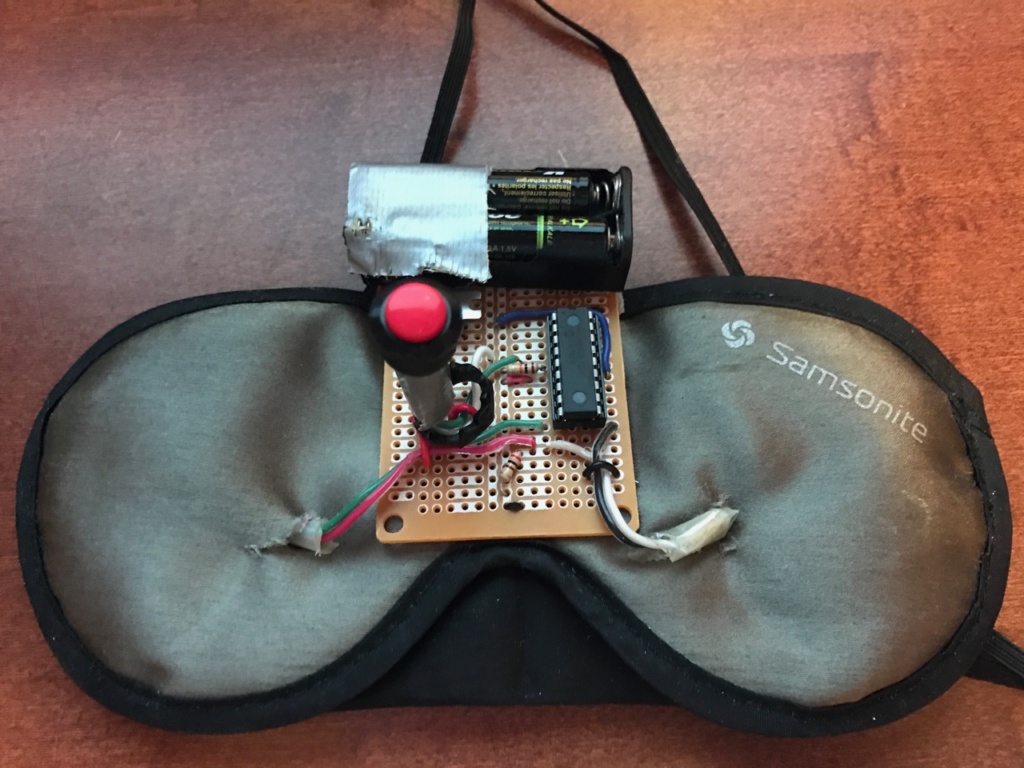 Everyone in my family sure thinks I’m crazy when I show them this thing, haha!

I can’t find it!  I’m still searching for the code on my old machines and will post here if I can find them.

When I put the initial prototype together I had no expectations of it actually working.  To my surprise it actually worked really well!  I think I had a lucid dream within a night or two of first using it.  Over the next several months I ended up having many lucid dreams with this device.  It actually worked so well I never found the need to add the additional features I talked about at the beginning (e.g. sensors to detect REM sleep, etc.)

After a while I lost interest in lucid dreaming.  Primarily due to lack of sleep (you end up waking up a bunch of times throughout the night).  Also, I found that I would end up with sleep paralysis many times when trying to experiment with lucid dreaming.  This is a very scary state where you are conscious and your body is paralyzed.  More info on sleep paralysis here.

I posted some info of this project on a forum many years back and got a ton of interest from all over the world.  Also, a couple years after I built this someone did a kickstarter campaign and raised over $500k for the exact same device above (without the reality check button).  So there’s definitely interest out there in devices like these.

I’d love to here from other people who’ve tried experimenting with devices like these!